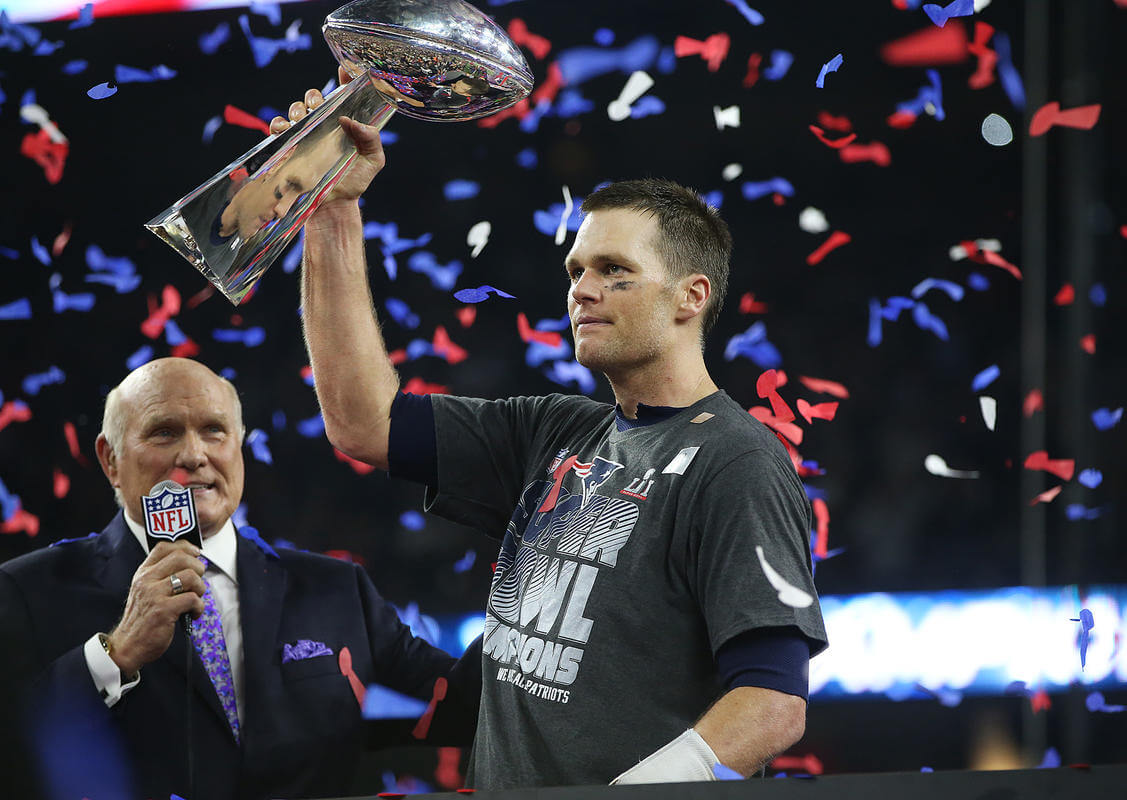 Today is the day! Last night I slept in my MHK pin and wore my clothes inside out– hoping for a snow day. I dreamed that the Patriots would make it rain on the Eagles. I saw blue and red confetti beaming from the heavens, and I saw Tom Brady closed fist yelling “LET’S GO” like the strappingly handsome 25-year-old man that he is. Looks like Pats nation is coming in strong in Minnesota — and TB12 can rest assured that blue jerseys are plentiful in U.S. Bank Stadium.  We pray that Brady can outmaneuver the Eagles Defense and we also pray that our Defense finds a way to eliminate the Eagles’ run game to limit the playbook for Foles. I don’t like seeing Brady get sacked, it hurts like I’m watching my Dad get sacked– truly. So finally, Offensive Line please bring your A Game today and don’t let anyone touch Tom Brady. Do Your Job, as you have so flawlessly in the past. We love you.

In Part 3 of this series, we will delve into the Dont’a Hightower strip sack during Super Bowl LI. In Part 2, we looked at the two, two-point conversion plays made in SB51, but the defense had to make a play in order for us to execute those miraculous two-point plays. Hightower executed a spectacular play and changed the energy of the game when the Pats needed it most.

Linebacker extraordinaire, Dont’a Hightower is no stranger to pushing guys off him to make a game-changing sack. But, breezing by his coverage usually proves difficult for a man of his large stature. The Patriots were down by 16 points in the fourth quarter with 8 minutes and 35 seconds left on the clock. It’s 3rd & 1 at the Falcon’s 35-yard line and Matt Ryan pushes back to the 25-yard line to throw the ball. His plans were foiled when Hightower emerged out of nowhere to sack Ryan at the Falcon’s 25. Hightower faked out his matchup, Devonta Freeman, and like a stealthy cheetah stalking his prey, he sacked Ryan, causing the ball to come loose. Hightower’s sack stripped Ryan of the ball which allowed Alan Branch to come in clutch with the recovery. This sack was more than just a forced fumble, it was a positive and emotional charge that Patriots nation needed to feel hope.

We see an elated (yet focused) Tom Brady on the sideline, yelling “OUR BALL” with a wide grin– right before he runs off camera to take the field. Hightower and Branch executed the first Falcon’s turnover of the postseason, just when we needed it most. Sure enough, just two football minutes later– Danny “Playoff” Amendola dove over the goal line and into the end zone for the touchdown. Allowing the Pats’ to go for a two-point play, bringing Super Bowl LI to an eight-point game. During Brady’s next few drives, we saw incredible catches from Hogan and Edelman– then White was able to make a touchdown and Dola was able to complete a successful 2 point play. Brady, Dola, and White repeated steps 2 and 3 to tie up the game– with White making the touchdown and Dola completing the two-point play.

In Part 1 and 2 of this series, we discussed plays that directly changed the scoreboard of a game– but the strip sack changed the game’s emotional energy, which proved pivotal for the Pats to pull off the win. It was followed by a string of events that shook Pats’ nation to its core and charged them with the ability to believe in the impossible. The Falcon’s stripped their lead and the Patriots forced a fumble and the tide of the game in their favor.

The two main elements that run through each of these three plays are; vision and extreme preparedness. Hightower had the vision to make a play and Matt Patricia prepared his team to deceive the Falcon’s offensive line and make the sack that changed the game. It was the ‘sack heard round the world’ and without it, we may not have gotten the ball in time to tie up the game. You can thank Dont’a Hightower and Alan Branch for getting the Patriots in a place to drive down the field and achieve the greatest comeback in NFL history. Thank you Dont’a! Hope you’re feeling better– we miss ya!