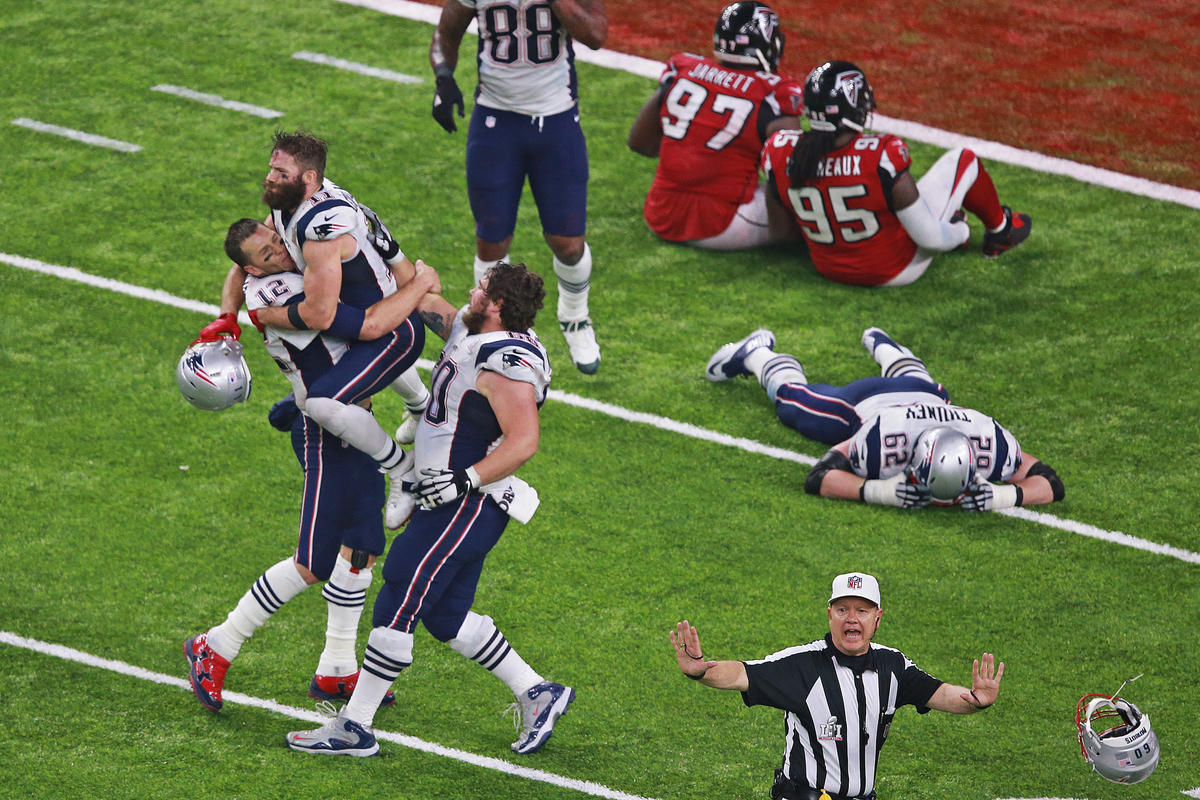 In Part 1 of this series, we looked at the famous Butler interception in Super Bowl XLIX. In Part 2, we’ll break down the 2 point conversion plays executed in Super Bowl LI, and how they tied up a 28-3 game, resulting in the first-ever overtime in Super Bowl history. Each of these moments in Patriots SB history are defined by two main characteristics– extreme preparedness and a true vision for success. An all-encompassing vision– one that includes, the foresight of their opponent and a fierce belief that they will win.

After an unsuccessful 2 point play made during the 2015 AFC Championship against the Broncos, Belichick made sure that his coaching staff was prepared with extra two-point conversion plays. Just as we saw in Tom v Time, Brady learns from his mistakes and studies them with a fine-tooth comb– often watching tape for four or five hours at a time. Belichick, like any good coach, works hard to ensure that his mistakes are never made again– working out the kinks on and off the field. Similarly, with Butler’s interception, the coaching staff prepared extra goal line packages in case that relatively unlikely situations were to occur. In each instance, it’s clear that the Patriots’ extreme preparedness for every possible game-time situation, pays off.

At the start of the fourth quarter, the Patriots find themselves down by 19 points. The time ran down on the clock as Brady endured two sacks. After a successful field goal, the score was now 12-28. The Falcon’s got the ball and Ryan was sacked by Dont’a Hightower after breezing by Devonta Freeman. The ‘strip sack’ as it is referred to, forced a fumble and the ball was recovered by Alan Branch. Just five plays later, the Pats are damn near the end zone– and sure enough, Amendola does his job. With Dola’s touchdown, the Patriots were in a position to make their first two-point conversion play of the night. In that play, we saw a faked high snap to Brady, with White snatching the ball and slamming over the goal line into the end zone.

The second two-point conversion came after the spectacular Julio Jones catch near the sideline. Matt Ryan was sacked, and the Falcon’s were struck with a Holding which pushed them out of field goal range. The commentators had just praised Julio Jones’ catch as ‘the best of the season.’ Yet, little did they know, Edelman was about to make the most amazing and improbable catch of all time. After an unsuccessful challenge by the Falcons of Edelman’s catch, the Patriots stood much closer to the end zone, allowing James White to score another touchdown. Their second two-point conversion play occurred with just under 1 minute on the clock. Amendola pushed his body backwards over the goal line, to complete yet another two-point conversion. The game was now tied– and the overtime clock began. A Super Bowl overtime is improbable on its own– but the Patriots were about to prove Vegas wrong and climb the mountain of cards stacked against them. The Patriots’ won the coin toss and they called for the ball. It’s clear that luck was in their favor, and they had the will to triumph over the Falcons’ by scoring in this overtime.

The overtime play where James White scored the winning touchdown, was the additional play that Belichick asked his coaches to put on their call sheets. Lewis had practiced this play but James White was the one who was available to run it– even though he hadn’t practiced it before. White was set behind Brady near the 2-yard line and he dove into the goal line, scoring the game-winning touchdown for the Patriots. This is very similar to the Butler Interception, in that, it was an extra play that Belichick had called for and it was executed by a player that had not successfully practiced it before.

These three incredible plays would never be achieved without the Patriots’ tendency to prepare for every improbable circumstance that they may encounter during a game. Their foresight to prepare for and anticipate their opponents tendencies, combined with their belief in achieving the impossible– makes the Patriots unstoppable. It’s no surprise that they are led by a man who was considered a sixth-round draft pick and grew to be the greatest quarterback of all time. Brady didn’t listen to the scouts who put their odds against him. He defined his own success, by preparing to be the best athlete he could possibly be. The bets against his success were outweighed by his vision to be the greatest of all time. When there was a 99% chance after Halftime that the Patriots would lose, Tom decided to prove those odds wrong, as that’s what he does best– he wins.

The Patriots have engaged in many of the most improbable and unbelievable games in NFL History, it’s no surprise that they prepare for any and all unlikely game time situations. For the Patriots, each season-making game becomes a game with extraordinary and unusual circumstances. They must prepare for anything and everything, because unlikely situations to most athletes, have now become common occurrences for the Pats.