Home Celebrity Will America Be As Moved by “Patriots Day” as Bostonians Were?

On April 15, 2013, Tamerlan and Dzhokhar Tsarnaev detonated two pressure cooker bombs at the Boston Marathon Finish Line, killing three people, wounding and mutilating hundreds, and launching a week-long manhunt than would not only traumatize the Boston community but also add to the bloodshed with the senseless murder of an MIT campus police officer and the death of the older Dzhokhar’s brother Tamerlan. It’s a week that is indelibly etched into the hearts and the minds of Bostonians. This week, “Patriots Day”, a movie that dramatizes the events of that fateful week starring Mark Wahlberg, John Goodman and J.K. Simmons, opens in theaters nationwide.

As the “Patriots Day” movie opens across the country, I wonder if people outside of Boston will be as emotionally moved by this movie as people who live here in Boston, and experienced the Boston Marathon Bombings firsthand, certainly were.

When “Patriots Day” opened here in Boston last month, the stars walked the red carpet at The Wang Center with Hollywood flair as movie goers flocked to cinemas to see how this horrific event was portrayed on the big screen.  Some were pleased and some were not. But regardless of how the people felt about how this movie was told, they certainly felt compelled to see it. Dirty Water Media Reporter Kayla Harrity was on the red carpet and shared that the feeling of awe and pride in the City of Boston was prevalent in all who were involved in making this film.

Patriots Day, Monday, April 15th, 2013 is a day that will forever be etched in the memories and the hearts of all Bostonians. Having been on site at the Boston Marathon bombings, just a few short blocks away from the finish line, and experiencing the events that followed firsthand, made seeing this movie all the more emotional and compelling for me. Director Peter Berg and actor – and Boston native – Mark Wahlberg had the very challenging task of telling this story.

Would they stay true to what really happened? How could they be respectful of the victims who died and their families, as well as the many individuals who lost limbs?  Fo me, watching “Patriots Day” on the big screen brought every memory I had of this horrific saga back to vivid life. Seeing Fenway Park overflowing with fans as they took in a last-minute win by the Red Sox over the Tampa Bay Rays before spilling out onto the streets to experience the Boston Marathon … seeing the marathoners pass through Kenmore Square as they made their final stretch to the Finish Line where I personally watched many of them pass … seeing the race come to an unimaginable halt as the reverberations of the bombs rang in our ears … and feeling the panic of the moments immediately after the bombs went off was not only a bit surreal but also very difficult to watch.  Knowing that I had been there and suddenly feeling the emotions of that frightening day come back as raw as the day it all happened made watching this movie unlike any movie I had ever seen before.

I was not physically at the Finish Line when the bombs went off but was close enough to immediately feel their after-effects. I saw the runners abruptly stopped in place as they tried to reach Mass Ave., nearly falling into the crowds from their previous 26+ miles of momentum and sheer exhaustion.  I saw the black police vehicles swarm the area, saw the crowds rushing away from the scene, sat in gridlocked traffic as my family and I tried to get back home. I was there. I was supposed to be at the Finish LIne. I was so close. So seeing, hearing and literally feeling those two bombs explode on the big screen filled in the only gap I had from that day, a vision so emotionally stirring that I did not even realize I was crying until tears streamed down my face.  It wasn’t a frightened cry, it was something that came from deep within, the overwhelming feeling of shock and disbelief. 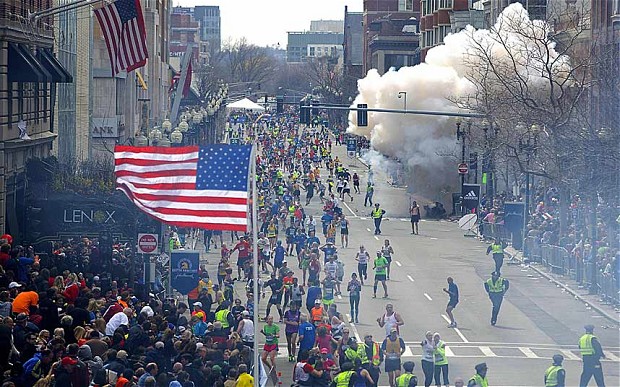 Patriots Day 2013 was a beautiful early spring day. My family was going to make the most of it, with plans to go to the Red Sox Game at Fenway, experience Marathon Monday and the Boston Marathon Finish Line for the first time ever, and finish the day off at the Bruins game at The TD Garden. Most teenagers would have been excited.  But I remember being annoyed that my parents had planned this day because that meant I would miss a cool party being held in my hometown by one of my friends. Being the moody high school freshman that I was, I was annoyed that I could possibly be missing time with friends. By the end of the day, that feeling that I might be missing out completely disappeared as I yearned to have the chance to go back to my family’s original plans for the day, to see the Finish Line on Marathon Monday, walk around this city that I love, and end the day watching the Bruins dominate at the Garden. I would have missed 100 parties if we could have just had the normal, peaceful, happy day that had been planned for me.

For me, watching “Patriots Day” brought back all the emotions, all the fear, sadness, and strength that I felt, that the city felt, over the extremely eventful couple of days, starting with the explosion of the first bomb at 2:49pm on Marathon Monday and ending with the celebratory capture of “White Hat,” “Suspect #2,” Dzhokhar Tsarnaev a few days later.  It was like watching a story that you already knew the ending to but you could not turn away, wanting to take in every detail, feel every emotion in order to honor and respect what the City of Boston and all of the bombing victims and survivors had enduring during that time. I was not at the Finish Line when the bombs went off, but I was certainly supposed to be. If not for an odd series of events that delayed me and my family’s arrival to the Finish Line, I easily could have been one of the victims whose lives were forever changed that day.

According to police reports, the Boston Marathon bombers planned the explosions to go off during a time when the Finish Line would be the most packed with spectators waiting for family members to cross the finish line and Red Sox fans departing Fenway Park to head to the Finish Line to take it all in.  I have never seen the Finish Line and I kept telling my Dad how excited I was to experience it, asking when we would get there, what it was like. Leaving Fenway Park after an exciting, last-minute win, took my family and I an unusually long time. We lingered in our seats watching some fans run the bases for charity, and once even looked at each other asking “why are we just sitting here?”.  Then when we did finally exit the park, we kept getting stuck in large mobs of people that seemingly stopped us dead in our tracks for long periods of time.  When we finally broke out of the crowd and starting making out way through Kenmore Square, my parents noticed a colleague and stopped for a while to chat with her about the day.  Then we were on the move again, and just as we reached Mass Ave, just four blocks away from the Finish Line, all momentum reversed.  Boston Police details ran out into the street stopping runners dead in the tracks and spectators just stopped in place looking around and wondering what had changed. Something was in the air, but there was no way to know what had happened.  All everyone seemed to know what that something bad was going on and we needed to head in the opposite direction of the Finish Line.  Before we knew it helicopters were flying overhead, black FBI vehicles were flying up and down the roads and the Boston Marathon would never again be the same and neither would we.

Seeing footage of the Red Sox game that I was at, watching the bombs go off, and listening to the stories of survivors sent chills down my spine. I strongly applaud the director on how he portrayed the spirit of Boston, from the strength and determination of the police officers, to the selflessness of the first responders, he truly brought the “Boston Strong” motto to life. As a 15 year old I was terrified of what was happening at my home, my city, and to this day I did not feel the same sense of security walking down Boylston as I did before April 15th. But this movie has helped. It has reminded me how amazing my city is, and how there is simply no place like Boston. The audience gets to learn so much from the movie, falling in love with the victims, the officers, and the first responders from learning their back story and relating to them as they are normal people just like us, normal people whose lives were changed forever

The events of the Boston Marathon defined my April vacation that year, as I was glued to my TV, watching the news, starting with the revealing of the photos of who they believed were the suspects, to the shoot out, to Dzhokhar hiding in the boat. I was simply amazed at how fast they were able to find the suspects, but after watching the movie I now understand as we see behind the scenes how hard they worked, not sleeping, not stopping, until the two bastards were found.

Sure there were a few flaws in the movie “Patriots Day”, times when I felt a little too much Hollywood was added for dramatic affect.  But overall I am glad that this movie was made and content with the fact that I got to see it come to life on the big screen.  While the content was emotionally traumatic to watch at times, seeing the story as a whole filled in many gaps for me and reminded me that, not only am I very lucky to not have made it to the finish line that day, but I am also very lucky to live in the City of Boston and to be able to know firsthand what it is like to be “Boston Strong”.  I hope the rest of the country goes out to see this movie so that they can appreciate this story as much as Bostonians do, as much as I did.