What a wild weekend. Some of the most bizarre football games I’ve watched in recent years. Well, we’re here at the Conference championship.

What the fuck happened? We had Blake fucking Bortles score 38 points on the Steelers defense, Ben Roethlisberger and the Steeler offense score 42 points on one of the best defenses in the league. Case Keenum beat Drew Brees in walk-off fashion, WHAT? Nick Foles beat Matt Ryan. The Eagles defense held the Falcons offensive juggernaut to just 10 points. What the hell is going on?

This week, Bortles and Foles are making their 3rd career postseason starts, Keenum is making his 2nd career start, and then there’s Tom Brady making his 36th career postseason start. Who predicted these 4 quarterbacks would be in the AFC and NFC Conference Championships? Nobody. I can’t believe what I watched this past weekend except for the Patriots game. Every other game was shocking. But that’s why I love watching sports.

I finished 2/4 again this round with a total 4/8. Let’s get to the predictions.

Can you believe the Patriots have to go through the AFC South to get to Super Bowl LII? What a joke. Can it get any easier for this team? God damn, I actually wanted to see Pittsburgh win that game because it would have been a much more fun and interesting game to write about. But instead, we get the Jacksonville freaking Jaguars. Though I did predict they’d beat them.

What can I say about this game? Blake Bortles is not going to score 38 points (Jax defense scored 7) on a Bill Belichick/Matt Patricia defense. Also, The Steelers scored 42 points on the Jacksonville defense, supposedly one of the best in the league. Are they really? I’m not really sure. I’m sorry, I am not buying this Jacksonville defense.

During the regular season, Jacksonville had a total of 55 sacks. Jacksonville had 28 sacks in four games against the Houston Texans and Indianapolis Colts. That’s half their sacks on the season. Just an FYI, those two teams suck. I’m not buying this defense. Also, this as well… 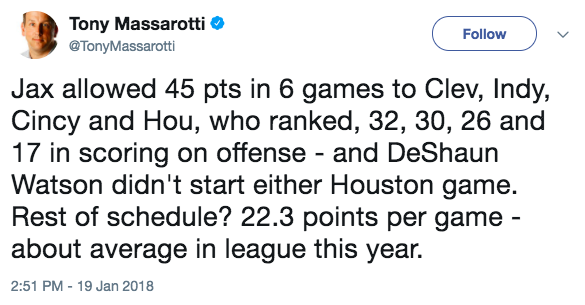 Isn’t it just so perfect that Leonard Fournette injured his ankle last game and then to top it all off, he gets into a fucking car accident on Tuesday? Thank god he’s okay, but he is not going to be himself this game.

The Patriots dominated Tennessee last Saturday, that same team beat Jacksonville twice in the regular season. Head coach Doug Marrone is going to piss his pants on that sideline and Bortles is going to do what Bortles does best, throw interceptions. I am not even going to buy the Tom Coughlin factor. For me to buy in, Coughlin will have to come down to the sidelines and rip that headset off Doug Marrone to give the Jags any chance. Coughlin is the only coach maybe ever to not be afraid of Belichick. Then maybe Jacksonville has something but other than that, no shot.

The Patriots are in their 7th straight AFC Conference Championship game and the Jaguars are in the AFC Championship for the first time since 1999. It’s been a while. The Patriots receive another tomato can game due incompetence from other NFL teams. Pittsburgh…cough…cough. The Patriots will cakewalk to Minnesota for Super Bowl LII.

Am I really about to write about Nick Foles and Case Keenum playing in the NFC Conference Championship? Wow, I really am. What an NFC Championship game we have here. The battle of the backup quarterbacks. What a snooze fest this is going be. I can’t believe Case Keenum or Nick Foles is going to start in a Super Bowl. Two defenses are going to battle it out while both offense game plan is going to be the “don’t turn the ball over” game plan. The run, run, pass offense. I don’t even know who to pick in this game. I like the weapons on the offensive side for Minnesota over Philly’s. I went against both Case Keenum and Nick Foles last week and they proved me wrong. If it wasn’t for that miracle play for the Vikings, I would’ve been right with my Saints pick. Fuck.

What the fuck was Safety Marcus Williams doing? I don’t know. Aside from the point, back to the game at hand. Both teams have top defenses in the league, the Vikings lead the entire league in yards per game while the Eagles were 4th in YPG. I was surprised the amount of throws Case Keenum made during that game, he finished 25/40 for 318 yards, 1 TD, and 1 INT. I think Keenum will be able to make big throws in crunch time moments with his better receiving core and the Vikings defense will be able to shut down Nick Foles pretty easily. I just don’t think Nick Foles is up to this challenge even at home.

If my predictions are correct, we will see a home Super Bowl for the Minnesota Vikings for the first time in NFL history. Technically it is the 3rd time it’s happened but other two instances were not the actual home stadiums of the team, rather they played in their market area. The San Francisco 49ers played Super Bowl XIX at Stanford Stadium (Stanford, CA), not Candlestick Park (San Francisco, CA). Also, the LA Rams played Super Bowl XIV in the Rose Bowl Stadium (Pasadena, CA), not the Coliseum (Los Angeles, CA). This is Minnesota’s home stadium. U.S Bank Stadium.

Next week I predict the biggest game of the year. Super Bowl LII.