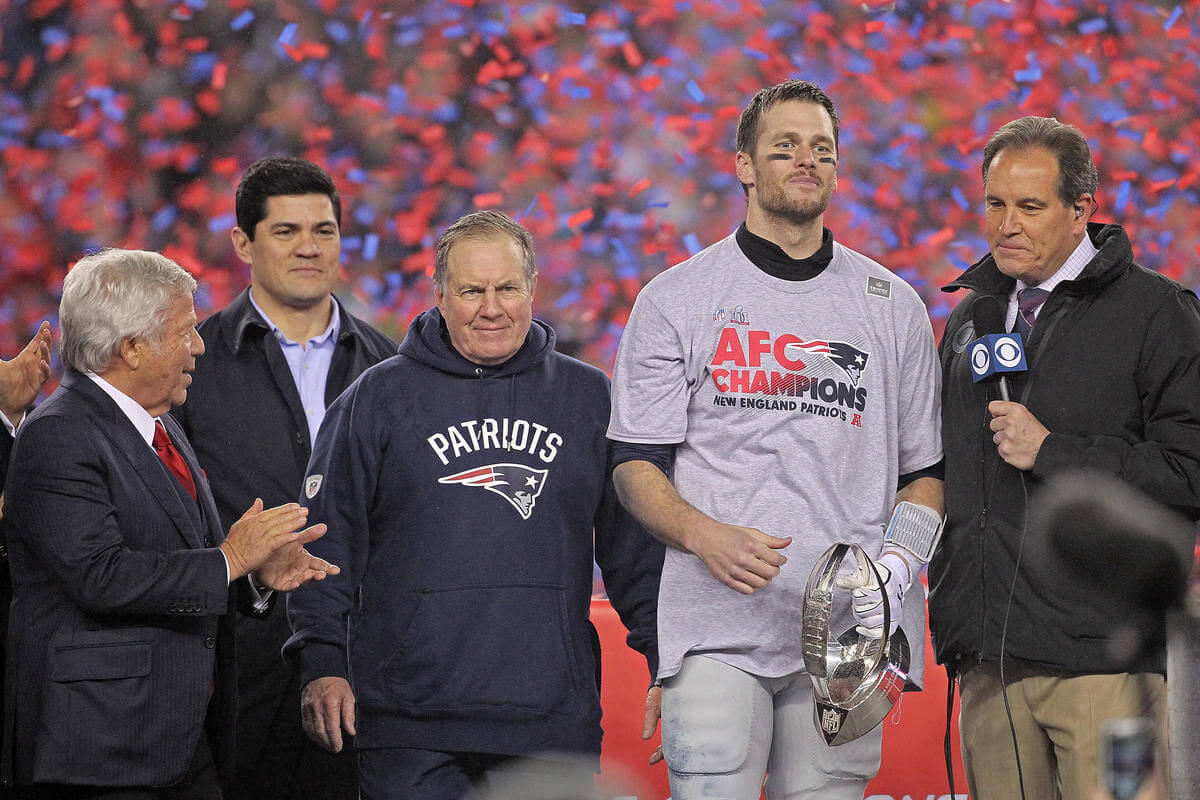 In any great marriage, there is always more than meets the eye. Sure, it looks like the American dream from the outside— three beautiful kids in College, a big colonial house, and a hypoallergenic dog— but Mom and Dad struggle behind the scenes to keep the house in order. Am I comparing Tom Brady to my Dad? No, but they are definitely tied for the #1 spot in my heart.

In recent days, reports have surfaced that Coach Bill Belichick and Tom Brady may be struggling to keep their house in order. Yes, it’s mainly all locker room talk or speculation— and perhaps a bit of exaggeration. But let’s face it, most NFL fans nationwide fantasize about the Patriots powerhouse collapsing. However, is there any truth to these accusations? Let’s break down some of the major claims in this widely discussed ‘Wickersham Report’.

Now, it’s important to note that this report, written by Seth Wickersham of ESPN, was compiled from a variety of sources— from Patriots staffers to various players, and other sources close to the organization.

The first major claim stated that Belichick was forced to give up Patriots’ backup quarterback, Jimmy Garoppolo, as a form of submission to Brady’s widely known goal of playing until he’s 45 years old. In October, Garoppolo was sent to the 49ers. In return, the Patriots received a second-rounder. The report claims that our beloved Head Coach was, “furious and demoralized” as a result of the Garoppolo trade.

Is there any truth to this strife between TB12 and Belichick? Shortly after Garoppolo’s 2014 acquisition by the Patriots, Brady Sr. made some foreboding remarks about Tom’s future position on the team. Tom Brady Sr., is quoted years ago, saying “It will end badly….It does end badly. And I know that because I know what Tommy wants to do. He wants to play till he’s 70.” It sounds to me like the writing has been on the wall for quite some time. But hey, who doesn’t call up their Pops to air their grievances every once in a while? Belichick always puts the team first— after all, Kraft hired Belichick to do what was right for the organization. This often requires Belichick to remain stoic and emotionless when it comes to roster decisions.

With any continued success comes the pressure to uphold a legacy. The report also claims that Kraft and Belichick disagree over the future of the team and how much autonomy should be awarded to the G.O.A.T with regards to his preemptive style of health maintenance. Brady’s right-hand man, Alex Guerrero has been a sort of body guru to the Quarterback in recent years. Guerrero’s privileges included; full fledge sideline access, ability to travel to away games, and was allowed to treat other high-level players.

Last month, reports circulated that Guerrero has lost those privileges as a result of building tension between the Patriots staff and Guerrero’s acquisition and treatment of the Pats’ star players. Look, I get it— the Patriots have a highly qualified staff and team Doctors giving star players instructions on their rehabilitation. However, they are reluctant to follow those instructions, because they’d prefer to listen to Guerrero’s rehab advice. Now, I can’t blame these players because they see how successful the ‘TB12 Method’ has been to some of the superstars of the Pats organization— so it must work. Sure, it may be a bit “cultish”, but it’s proven to do the job.

Brady responded to these claims during a weekly press conference. When asked if Bill told Brady about his plans to pull Guerrero from the sideline, Brady responded in an appropriately curt manner. Saying, “I have a lot of conversations with him (Belichick)… those are private between he and I.” Brady was also asked if this decision puts any “strain on his relationship with Bill,” to which Brady responds saying— “ I just try and show up and do the right things… I let my playing do the talking… that’s where my focus is.” Lastly, when Brady is asked if his relationship with Guerrero was a “distraction” to the team— he claimed that he should ask the players their own opinion, as he is just doing “what is right for him.” With Brady’s responses, we see the ‘team player’ attitude that we have come to expect and admire from the QB. However, the Wickersham report goes on to make bold and negative claims regarding Brady’s attitude and relationship to his teammates on and off the field.

This major claim is where the report becomes a bit difficult to read— claiming that players hold Brady in such a high regard that he has surpassed being the team player we have always know him to be, and into a kind of demigod that the team must look up to. Often, calling him “sir” and favoring his decisions and way of life over the suggestions of the Patriots organization itself. In my opinion, I find negative claims of Tom Brady’s attitude hard to believe— but I represent a demographic of fans who have trouble seeing Brady in an unfavorable light.

In response to the rumors the tremendous trio of; Kraft, Brady, and Belichick— have released a joint statement. Some speculate that this statement was a buffer for Brady and Belichick to refer to when asked about the accusations made in the Wickersham report. I disagree, I find this statement reassuring. The statement settles divorce rumors and speculation that Brady and Belichick have come to their breaking point. The statement reads, “(these) media reports have speculated theories that are unsubstantiated, highly exaggerated, or flat-out inaccurate.” The statement goes on to assure fans that “the three of us share a common goal”, and they “look forward to the enormous challenge of competing in the postseason and the opportunity to work together in the future.” The statement closes with the comforting phrase that this tremendous trio, “stands united” as they have for the past eighteen years.

Like most Patriots fans, I stand with Tom and Bill. Instead of harping on the structural issues of home, and looking forward to the next generation of the Patriot’s organization. I’d rather marvel at the beauty of the Patriots powerhouse from the front yard.